Connecting students from a distance: play.osta-aeco.org

This past fall, we started an official Instagram page, @ostaaeco, with the goal of engaging as many students province-wide as possible—after all, we are their official education stakeholder. This year, we’ve been committed to providing student-friendly updates on the Ontario education system in the form of simple, shareable, and easy to read posts.

Since we started posting these updates, we’ve gained upwards of 4,000 followers, mainly comprising Ontario students in elementary and secondary schools. Another large portion of these followers are students who were on track to graduate in the 2019–2020 school year.

On Tuesday, May 19, the Minister of Education announced that schools would remain closed for the rest of the school year. In response, we got creative to bring students together.

A flood of disappointment poured into the comments section of our post about the closures, mainly from these graduating students. Along with these were some students who were interested in setting up an ‘online graduation’ together.

‘Minecraft’ is a sandbox video game where players explore, create, and build in a procedurally generated 3D world. In this game, players also fight computer-controlled ‘mobs’ and engage in various ways with this interactive world. Due to its popularity and success as one of the best-selling video games of all time, it has also been widely adapted for use in education systems around the world, including our own.

A large part of our “newer, bolder us” initiative includes becoming a social brand. At OSTA-AECO, students define not only who we are, but they also shape the perspectives we bring to the table. We frequently engage with students in a light-hearded, conversational manner, even on our official social media pages. This has helped us create a unique bond between a key demographic and our brand, which has generated an overwhelmingly positive response.

As responses to our post began to compile, we noticed a pattern in students suggesting an online graduation on Minecraft. While we began to engage with these comments and suggestions, our communications team wanted to go a step further.

We continued to toy with the idea, going so far as to put a poll on our Instagram story to gauge students’ interest in participating in a #onted Minecraft server/graduation. We quickly noticed overwhelmingly positive responses for this virtual meet-up.

So, with the help of our technology team, as well as with the support of our incredible communications team, we decided we would make it happen.

Hosting a server for a video game is no small feat, and this was definitely foreign territory for our organization. As our technology team began setting up servers and implementing new security features to ensure the safety of the rest of our technical infrastructure, our communications team began a risk management assessment and put together an action plan to turn this idea into reality.

Going into this, we had no idea how this would turn out, or whether students would even join us; even after this, we decided it was still worth a shot, and saw it as an opportunity to lift many disappointed students’ spirits. Even if only one student joined, we reasoned, their happiness would make the effort worth it.

Thus, in just two hours, our communications team was able to set up a comprehensive risk management and moderation plan, while our technology team set up a server to host the game. I cannot describe in words how proud I was of our collective effort when I was able to log on to the Minecraft server play.osta-aeco.org.

With all of our planning efforts nearing fruition, we released the link to our followers. We tried our best to ‘hide’ it, in a way, putting it only in our story highlights, and making students actively search to connect. We thought a minuscule amount of students would actually find the link, and of that amount, even less would connect.

We’ve never been happier to be wrong.

The half hour after posting the link was really something special to witness. Students began sharing our Instagram story with their followers, sending the link to the server to their friends, and, ultimately connecting and joining our meet-up. When students first joined, they had the opportunity to post messages on a message board. Many took the opportunity to show off their local pride, give words of inspiration, or even share memes and pop culture references.

What we witnessed was a community forming.

Many were confused as to what to do. Now that they joined, what was the goal? For some people, this was their first time ever playing Minecraft. So we began a challenge. The first person to ‘beat’ the game (by progressing through all three different worlds), would get a shout-out on our social media pages. And thus the race began. While many were looking to beat the challenge, others took the opportunity to build large structures, their own houses, share materials, and more.

Of course, there were a few bumps along the way. While most players were engaging with each other positively in the chat, we began to see some grow frustrated at others due to “player vs. player” combat. At this point, we had upwards of 50 students playing on the server, while more continued to join, with many more still reposting the link and inviting friends. Our moderators and server admins began to encourage teamwork, announcing that more than one person could earn the shout-out prize. Students began to form teams together, and we witnessed incredible alliances of students come together. In working together, these alliances were all able to complete the game by working together.

What we witnessed was a community forming. These students began to form bonds and friendships across the entire province. It was almost entirely reminiscent of our OSTA-AECO conferences, where student trustees get to network and make connections with other leaders across the province. The server continued to grow, with a variety of students leaving and joining every other minute. We were reaching upwards of 75 students when we began to wrap things up.

Once the students completed the game, we gave them the opportunity to build whatever they wished. The screenshots below are the result of that. They even set up their own group picture! 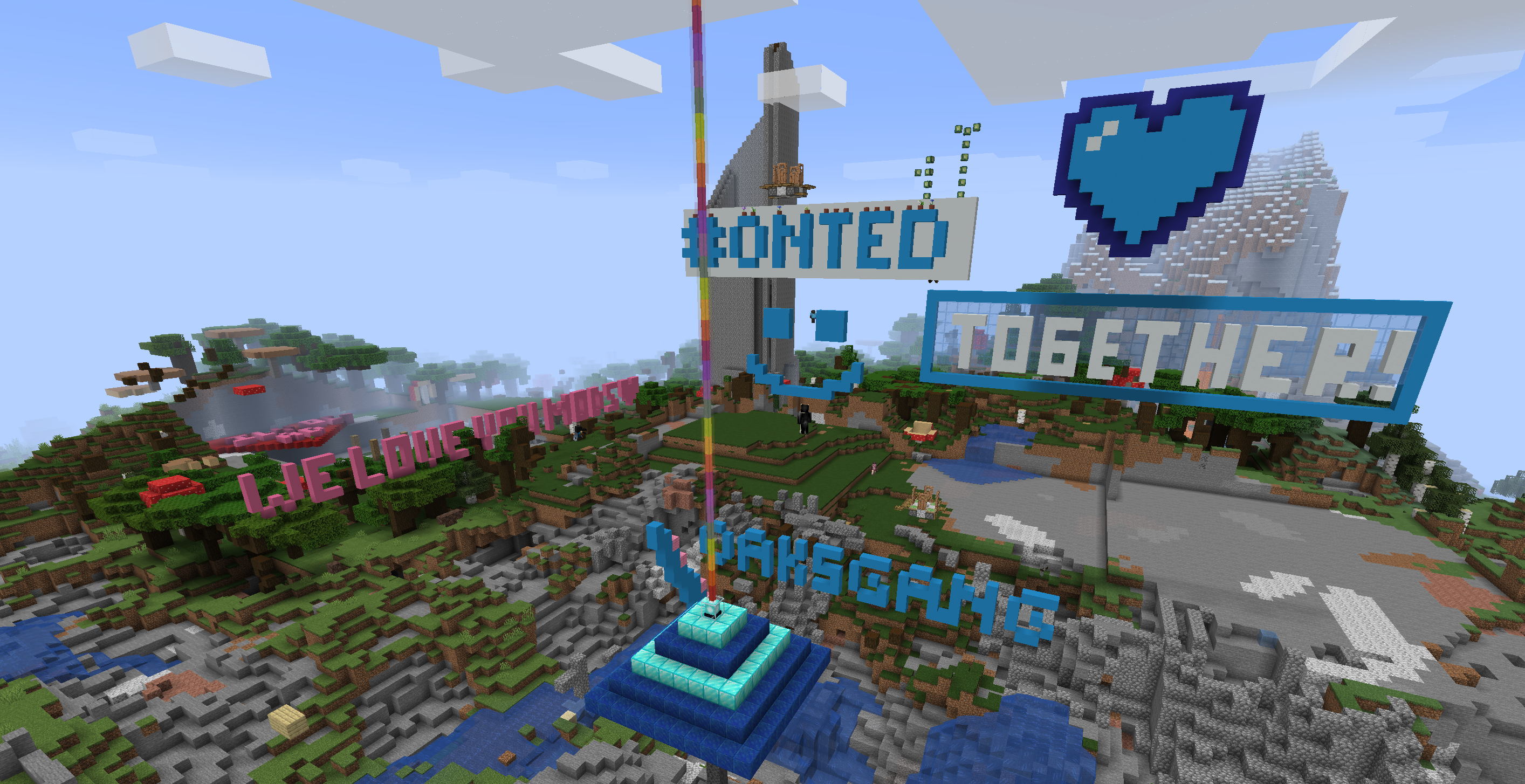 Our concerns of ‘unprofessionalism’, things going wrong, and assumptions that people would be hostile to each other were quickly proven wrong. Being a social brand is not unprofessional. The concept of engaging with your audience comes from being on the same level as them, not trying to establish dominance or superiority.

When you engage with your audience, you begin to develop transparent, common goals—and this doesn’t just apply to students. Risk is a factor in all initiatives, and should never be the sole deciding factor in whether an idea should come to fruition. Risk is information—just one piece of the puzzle.

We all spent our day doing something we definitely didn’t expect when we woke up that morning, and our entire team ended up having just as much fun as the students. We invite you to join us for our next server meet-up—who knows, you may end up learning the same lessons we did in doing this!

Even after the server shut down, we continued to have students reach out to us, thanking us for hosting, saying it was a great experience. Here’s some of the comments they had.

“Thanks so much [OSTA-AECO]! This was a wonderful opportunity to have fun and collaborate with my peers! I hope you can do it again!”

“Thanks @ostaaeco for hosting this Minecraft server! Finally beat the ender dragon!”